Zionism and the Third Reich – Was Hitler a Zionist Agent? Did Hitler Create Israel??

This is part 3 in series dealing with the issues concerning Hitler, National Socialist Germany and the Jews. In the first part, I demonstrated that powerful and influential self-described “Jews” in New York and London declared war on Germany in 1933, and launched a world wide economic warfare against her, based upon bogus atrocity stories. In part 2, I showed that the largest and most influential Jewish organization in Germany at the time, publicly stated that these stories were untrue and that they themselves attempted to defend National Socialist Germany against the vile, slanderous atrocity propaganda, and how of their own accord, they took measures to re-assure the world that the atrocity stories were untrue, and moreover, that these stories were doing more harm than good, by fanning anti-Jewish sentiments within Germany. Now let’s turn to the issue of Zionism.

Many in the so-called “truth movement” today claim that Hitler was a Jew and / or a Rothschild, or a Zionist agent, and hence; that was “founder of Israel”. I have already dealt with this in a variety of previous posts and refuted those lies, but let’s look more closely now at the “Zionist agent” allegations. The so-called “Jewish Question” was not something that Hitler invented nor a problem that Hitler alone had perceived of. It was well discussed by Churchill and Roosevelt, and many others in Europe too. Hitler openly acknowledged the problem, which was also acknowledged by the Zionist Jews themselves!

Hitler sought to work with them to bring about a mutually beneficial solution. He did not, however, “ally” himself with the Zionists, as many today claim, but rather acknowledged them as a distinct race and culture, and he negotiated with them honourably, right in the midst of a wave of global Anti-Germanism, created and fanned by self-described “International Jewry”, which I believe was really a just front organization for the International Bankster Gangsters, the very same interests which Hitler decried and attempted to free his people from.

This group were attempting to strangle Germany economically, in the hope that the Hitler’s government would then collapse, return to the status quo: the Weimar “free for all” Republic, and the dictates of the Versailles Treaty,  under which the International Bankster Gangsters could then go back to “business as usual” in bleeding Germany to a slow and painful death. And, thereby removing a real competitor from the world market.  Not to mention leaving her and Europe wide open to the Soviet Bolshevik menace. Thus, the “status quo” was NOT acceptable to the Germans, which is precisely why Hitler and the NSDAP were elected to government and was NOT an option!

No other countries wished to take large numbers of Jews, and no other organization was in place with whom they could negotiate. Hitler’s support for them, however, was limited!

Excerpt from Zionism and The Third Reich, by Mark Weber (IHR)

German support for Zionism was not unlimited. Government and Party officials were very mindful of the continuing campaign by powerful Jewish communities in the United States, Britain and other countries to mobilize “their” governments and fellow citizens against Germany. As long as world Jewry remained implacably hostile toward National Socialist Germany, and as long as the great majority of Jews around the world showed little eagerness to resettle in the Zionist “promised land,” a sovereign Jewish state in Palestine would not really “solve” the international Jewish question. Instead, German officials reasoned, it would immeasurably strengthen this dangerous anti-German campaign. German backing for Zionism was therefore limited to support for a Jewish homeland in Palestine under British control, not a sovereign Jewish state… /23″

To further understand the “Transfer Agreement” between NS Germany and the Zionists, I recommend you listen to the following. or download the free booklet and read it for yourself.:

Deanna Spingola reads from the book: The Transfer Agreement Boycott Fever of 1933 by by Professor Udo Walendy. This 40 page booklet goes into all of the pertinent background information regarding the declaration of war against Germany by self-described “World Jewry” or “Judea” , and their global boycott of German goods and services, based upon anti-German propaganda. Their objective was to bring Germany to her knees and to destroy her. They began to implement this plan, under false pretences (pretexts) , as soon as the National Socialists came to power, in order to undermine Hitler and the NS economic rescue plan, and thereby, subvert the democratically expressed will of the German people who had elected his party. It was a “False Flag Operation” of global proportions.

Hitler’s party platform did indeed include an appeal for racial purity in Germany, and the removal of Jews from positions of power and influence, and a return of power to the people.  Even after the Nuremberg Laws were decreed, Jews however, could still make appeals to Hitler directly from exemptions, and he was dealing with these daily until at least late 1942 or early 1943 (well into the war).   It must be noted too that, it was the British who put an end to emigration to Palestine when the war started, leaving any who wished to emigrate to Palestine stranded in Germany and later in transit camps. The western powers also refused to cooperate with Germany  on alternative plans to have the Jews emigrate to locations such as Madagascar.  But not all Jews wanted to leave Germany. Most rather enjoyed living there and wanted to stay.  Approximately 150,000 loyal Jews served in the military and defended National Socialist Germany.  Proven loyalty and devotion to Germany was always the key!  I will cover this in more detail with expert sources at a later date.

It must also be underscored again, however, that Hitler’s support of Jewish immigration to Palestine was NEVER intended to be at the expense of the Palestinians, for whom he had great empathy, and he also worked closely with the Grand Mufti to support their cause, and vice versa.

VIDEO: Hitler speaks on the plight of the Palestinians and of USA and British hypocrisy 1939

In the picture below, the Grand Mufti Husseini meets with Adolf Hitler in Berlin

The picture below is of National Socialist supporters in Palestine. 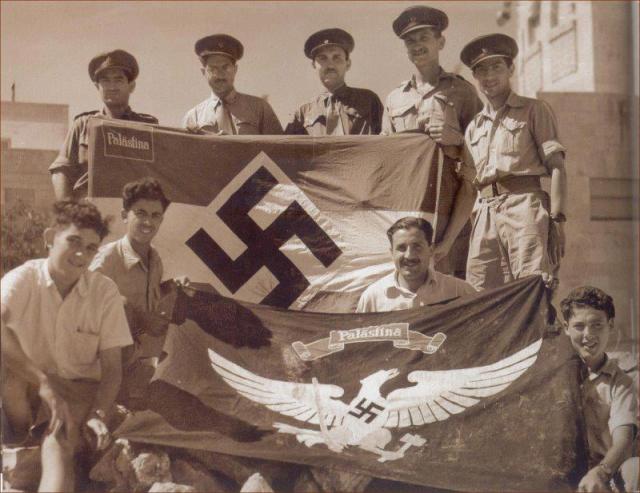 Would this be possible if Hitler was a “Zionist Agent”? Do you think these people considered Hitler as the man responsible for the creation of modern day Israel? Or rather, as their ally?

Before wrapping this up, I will leave you with the following for your further consideration which demonstrates (again) the utter hypocrisy of the “ALL LIES”.  Moreover, I believe it is further evidence of a criminal conspiracy to demonize Hitler and NS Germany for the sake of a profitable war, and for the protection of the interests of the self-described “Jewish” Bankster Gangsters, even at the expense of Jews in Germany and Europe. It is high-time for people to re-examine everything they thought they knew regarding Hitler, National Socialist Germany and World War II.

What FDR said about Jews in private

In May 1943, President Franklin Roosevelt met with British Prime Minister Winston Churchill at the White House. It was 17 months after Pearl Harbor and a little more than a year before D-Day. The two Allied leaders reviewed the war effort to date and exchanged thoughts on their plans for the postwar era. At one point in the discussion, FDR offered what he called “the best way to settle the Jewish question.”

In 1923, as a member of the Harvard board of directors, Roosevelt decided there were too many Jewish students at the college and helped institute a quota to limit the number admitted. In 1938, he privately suggested that Jews in Poland were dominating the economy and were therefore to blame for provoking anti-Semitism there. In 1941, he remarked at a Cabinet meeting that there were too many Jews among federal employees in Oregon. In 1943, he told government officials in Allied-liberated North Africa that the number of local Jews in various professions “should be definitely limited” so as to “eliminate the specific and understandable complaints which the Germans bore towards the Jews in Germany.” [FDR also]… dismissed pleas for Jewish refugees as “Jewish wailing” and “sob stuff”; expressing (to a senator ) his pride that “there is no Jewish blood in our veins”; and characterizing a tax maneuver by a Jewish newspaper publisher as “a dirty Jewish trick.” But the most common theme in Roosevelt’s private statements about Jews has to do with his perception that they were “overcrowding” many professions and exercising undue influence. ”
http://www.latimes.com/news/opinion/commentary/la-oe-medoff-roosevelt-holocaust-20130407,0,581781.story

“Jewish supporters of Winston Churchill are to unveil a bust of the British wartime leader in Jerusalem this weekend in what they say is a long-overdue recognition of his staunch and unwavering support of the Jewish cause and their desire for a homeland.

“As a passionate Zionist all his life and a philo-semite, Churchill has been under-recognised,” says Anthony Rosenfelder, a trustee of the Jerusalem Foundation, which is behind the project to commemorate the British leader. He “combined a historical understanding of the Jewish people and what the promised land meant for Jews … with realpolitik”.

It is perhaps ironic that a statue of Churchill should stand just yards away from the King David Hotel, scene of a deadly Jewish terror attack on British military headquarters in 1946 that was to hasten the demise of mandate rule in Palestine.”
http://www.independent.co.uk/news/world/middle-east/sir-winston-churchill-zionist-hero-8277918.html

14 Responses to Zionism and the Third Reich – Was Hitler a Zionist Agent? Did Hitler Create Israel??