Did Hitler escape to Argentina or to a secret South Pole hideaway? I’m afraid not, but I’m sure there is money to be made in keeping such conspiracy theories afloat, and various agendas are served by it, primarily the agenda of fear and loathing. There are many who wish to portray Hitler as a coward and betrayer of his people by fleeing, while other armchair quarterbacks insist that his suicide is also evidence of coawardess and they apparently think he should have surrendered to become the center piece of the Nuremberg Flying Circus show trials; that some how such a spectacle would have been “honourable”. There are no doubt also many Hitler fans who have held a small hope in their hearts that the Fuehrer had actually out-smarted the ALL LIES,  got away, and lived the rest of his life happily ever after with his bride Eva Braun.  Well,  I am very sorry to disappoint you.  He did take his life in Berlin in 1945 and there is substantial verified and corroborated forensic evidence which proves it. The rumours of Hitler’s escape were started by none other than Joseph Stalin, shortly after Berlin fell. and the German forces were defeated.

I am going to borrow heavily here from Metapedia to lay out the general story and then add the forensic evidence from various sources which seals the deal and should put “paid” to this persistent rubbish that floats around the Internet in conspiracy theory circles.

“Hitler heroically had before the start of the second world war connected his personal fate with the outcome this war[1]. Not only in words, but also in deeds: he committed suicide on April 30 1945, when the war was irrevocably lost. His suicide is also stated by authentic witnesses, who also lived in the Führerbunker, and it can therefore be considered as a fact of history. Despite this, rumours and theories that Hitler survived the war are widespread and popular. And there are many theories about what happened with Adolf Hitler after the fall of Berlin. These are all hoaxes; not based on the facts. Some of such rumours and theories say that Hitler escaped to continue the National Socialist struggle from a different country. A particular popular version is the theory that Adolf Hitler would have escaped during the fall of Berlin in 1945 and gone to Argentina.

The Soviets weren’t helpful on the matter of the German leader’s death.

“The Soviets continued to be difficult. They refused to allow Westerners into Berlin even after the surrender of Dönitz’s government and the last armies in the field on May 7-9. On May 10, they announced the existence of the burned bodies in the Chancellory courtyard, but only allowed that one might be Hitler. The same report went on to say that his body might never be found.

“On June 6, a spokesman for the Soviet army in Berlin announced unequivocally that Hitler had committed suicide and that his body had been identified. Three days later, Marshall Zhukov, the head of the Soviet army gave a press conference with Deputy Foreign Minister Andrei Vishinski looking over his shoulder. ‘We did not identify the body of Hitler,’ he said. ‘I can say nothing definite about his fate. He could have flown away from Berlin at the very last moment.'”

In an interview on Deadline – Live, an Argentine news program, journalist Santiago Romero interviewed Abel Basti about Hitler’s escape, life in Patagonia, and the events that followed World War Two.

Romero: What is your opinion on Hitler’s escape?

Basti: “Hitler escaped via air from Austria to Barcelona. The last stage of his escape was in a submarine, from Vigo, heading straight to the coast of Patagonia. Finally, Hitler and Eva Braun, in a car with a chauffeur and bodyguard—a motorcade of at least three cars—drove to Bariloche (Argentina).

“He took refuge in a place called San Ramon, about 15 miles east of that town. It is a property of about 250,000 acres with a lake-front view of Lake Nahuel Huapi, which had been German property since the early twentieth century, when it belonged to a German firm by the name of Schamburg-Lippe.”

Romero: “On what basis do you claim that Hitler was in Spain after leaving his Berlin bunker?”

Basti: “I was able to confirm the presence of Hitler in Spain thanks to a—now elderly—Jesuit priest, whose family members were friends of the National Socialist leader. And I have witnesses that allude to meetings he had with his entourage at the place where they stayed in Cantabria.

Historians have generally agreed since the end of the Second World War that, staring defeat in the face, an increasingly feeble and paranoid Hitler had married Eva Braun in the bowels of his Berlin bunker after midnight on April 29, 1945, and later dictated his will. His physician Werner Haase, in response to Hitler’s questions, had recommended a dose of cyanide and a gunshot to the head as the most reliable form of suicide.

Hitler, convinced of the treason of SS leader Heinrich Himmler, doubted the reliability of the SS-supplied cyanide tablets and had one tested on his dog Blondi, after which the dog died.

Following lunch on April 30, with Soviet forces less than 500 metres from the bunker, Hitler and Eva said goodbye to staff and fellow occupants, including the Goebbels family, private secretary Martin Bormann and military officers.

They went into Hitler’s personal study at 2.30pm and at around 3.30pm some witnesses reported hearing a loud gunshot.

Those, including valet Heinz Linge, who went into the study reported the smell of almonds, consistent with cyanide gas. They said they saw Hitler slumped on his desk with a bullet wound to his head, a pistol on the floor and blood pooling on the arm of the sofa on which Eva lay beside him with no visible sign of injury. Several witnesses said the bodies were then carried up to the emergency exit and into a small bombed-out garden behind the Chancellery where they were doused with petrol and set alight, then buried in a small crater when the Soviet shelling made it unsafe for the cremation to continue. Seven and a half hours later, Red Army troops began storming the Chancellery and the remains of Hitler, his wife and two of his dogs were said to have been discovered in a shell crater by a Soviet soldier.

The Soviet story changed regularly in the aftermath of the fall of Berlin and in the following years. Conspiracy theorists point to suggestions that:

Joseph Stalin told Western leaders at the Potsdam Conference in 1945 he believed Hitler may have escaped to Spain or South America.

Stalin’s top army officer, Marshal Georgy Zhukov, said: “We found no corpse that could be Hitler’s.”

The acting chief of the US trial counsel at Nuremberg, Thomas J Dodd, said: “No one can say he is dead.” The most convincing evidence of Hitler’s suicide came from the testimonies of those who were in the bunker — but they did not all agree on the details.

Hitler’s bodyguard Rochus Misch, the only survivor of the bunker still alive, told this year how he heard someone shout to Hitler’s valet, “Junge, Junge, I think it’s happened.”

After the bodies were carried upstairs, Misch said: “Someone shouted to me, ‘Hurry upstairs, they’re burning the boss!’ ” But Misch decided not to go, in case the “last witnesses” were shot. He was later captured after fleeing the bunker and spent eight years in Soviet prison camps. Details of a Soviet autopsy on the remains they found, released years later, apparently showed gunshot wounds and cyanide poisoning. The remains were repeatedly buried and exhumed by Russian agents during their relocation from Berlin to a new facility at Magdeburg. There, they were put in an unmarked grave with the bodies of propaganda minister Joseph Goebbels, his wife and their six children.

When the facility was due to be handed over to the East German government in 1970, the KGB, it is said, exhumed all ten bodies, burned them and threw the ashes in the river Elbe to prevent the area becoming a National Socialist shrine. They kept Hitler’s jaw and part of his skull — the fragment now thrown into doubt by US archaeologist Nick Bellantoni, who was given permission to examine the artefacts in the Russian state archive. Other discrepancies which have muddied the waters include a photo released by Soviets at the time of the fall of Berlin which purported to be the body of Hitler, shot in the forehead. It is now thought to be one of Hitler’s body doubles.

Others who believe he escaped subscribe to a variety of conspiracy theories. The most popular include one or more of these elements:…”  (continues)

Hitler did die in Berlin in 1945.  A post-mortem was conducted and his dental records,  jaw bones, teeth and in particular, his dental bridge work have positively identified the remains of Adolf Hitler. The following link contains many articles on the subject, a few of which are very good, especially the one entitled:

Dr Erwin Giesling working with Dr Carl Von Eicken, were Hitler’s ENT specialists. They treated Hitler’s ear injuries caused by the assassination attempt of 20 July 1944. At the time of the X-ray Hitler was ‘suffering’ from a festering infection in his left maxillary sinus. Not long after this he had dental surgery performed by Hugo Blaschke (10th November 1944) as a result of a massive infection in tooth No 6 in the left upper Jaw. Since this tooth formed part of a substantial bridge and Hitler refused lengthy treatment, Blaschke decided to cut off the section of the bridge with teeth 5 and 6 and extract tooth 6. Someone has ‘added’ this dental work to the X-ray.

Red Army forensic team examines the evidence in the bunker:

Dental detective work gets to the root of Hitler mystery

A NEW portrait of Adolf Hitler’s last days before he committed suicide in the Berlin bunker emerged yesterday, revealing how the Nazi leader was tormented by tooth decay, abscesses and gum disease that caused “terrible bad breath”.

The whole tooth: Prof Michel Perrier with some of the photographic evidence used to confirm that remains found in 1945 were Hitler’s The study of film footage of Hitler, enhanced by a computer, has confirmed that remains found by the Russians in 1945 were his, helping to end half a century of speculation about his fate and validating an identification technique of increasing value to forensic scientists.

A paper was presented yesterday at an international conference in London by Prof Michel Perrier, 52, of the University of Lausanne, and will be published in the Journal of Forensic Science. It links newsreel footage with X-rays of Hitler’s skull, jaw remains found in the bunker beneath the Reich Chancellery garden and his dental records.

DENTAL EVIDENCE IN THE POSTMORTEM IDENTIFICATION OF HITLER 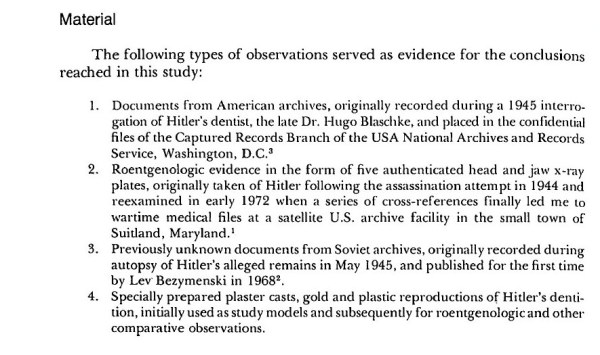 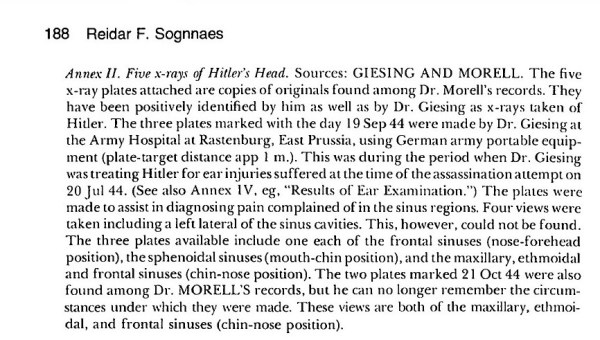 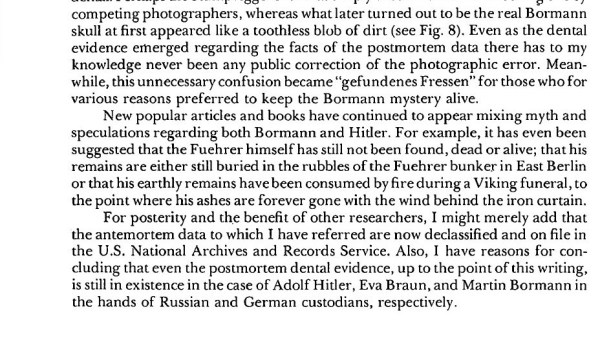 Hitler’s well known dental issues and his custom bridge work were positively identified by his dentist and the dental assistant. The jaw bones found in the Kremlin archives combined with the X-Rays from the Post-Mortem report, which matched these with other images known to be that of Hitler,  plus the eye-witness testimony of those who were there prove that Adolf Hitler died in 1945.  The evidence is conclusive and there is no “escaping” it.