A 2012 Dresden News Article Report on Mass Graves found in the City Center, but known since 2002

Already at least eleven bodies found at Wettiner Platz! Why have they not told us about this mass graves? Files show that the first bodies were first discovered in 2002!

Dresden – It’s an incredible discovery in the City Center of Dresden. On Thursday at Wettiner Platz, construction workers came upon a mass grave containing bombing victims, such as has not been discovered for decades.

The remains from 11 dead have already been exhumed, just 1.50 meters below the road! Many of them children and women.

But now the truth comes out: The mass grave has been kept secret for 10 years!

BILD now has files in its possession that show that these bones were found already in January 2002 during construction of the canal. Already then, a child’s skull, leg bones, a female pelvis were found. Talk then was of an entire mass of people.

“The fact that bones were previously found here is not unknown. Mass graves of this dimension would have been a huge issue” says Jens Hoffmann of the War Graves Commission.

But why was the grave was concealed?

In fact, the previously discovered bones were removed. The registry office had issued anonymous death certificates. But the file (AZ 414 UJs 2249102) was never made public.

Did they want to avoid hysteria amongst local residents?

By the present finding of at least 11 additional bodies, the question arises as to just how many people are still under the Wettiner Platz.

“Because so many bomb victims have been found in only 15 square meters, there is no telling how many there may still be,” says Hoffmann.

All around the  Wettiner Platz on the night of the 13th and 14th of February 1945, the first bombs fell. The area surrounding today’s music academy was completely destroyed. Thousands of civilians were killed. 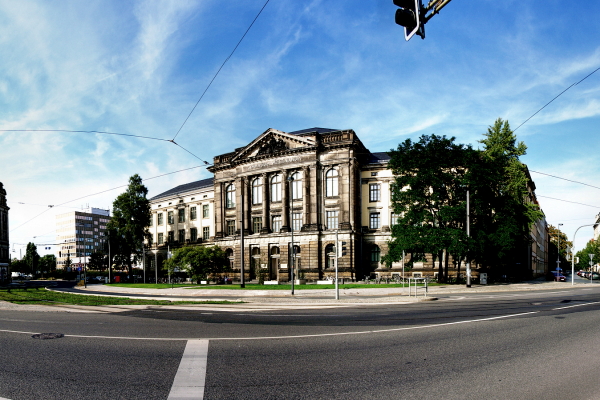 Who were the dead?

Unfortunately, it cannot be determined who exactly died at the Wettiner Platz. The majority were women and children. Among them, a child under 3 years, another 5 to 7 years old.

Since some of the bones in the ground around the area have been found in wooden chests (especially the children), they may have been known residents. Neighbours or the survivors apparently attempted to bury them in an improvised manner in the ground.

The masses of corpses were mainly carted either in carts to the Heide Cemetery or burned at the Old Market Square. However, since roads were partly blocked by debris and there was no longer a means of transport, the dead were also simply buried on site.

What will happen with the bones?

The volunteers of the Society for the Maintenance of War Dead Graves  carefully examine the area piece by piece and collect every bone found and try to put them individually into a container for each.

They are then given over to the Attorney General, who then pass them on to the Coroner’s Office. There, it must be determined for certain if the bodies are truly those of war victims from 1945.

Only then can they be re-interned. In this case, at the Johannis Cemetery in Tolkewitz.

Will the entire area now be ripped up to continue the search?

The Wettiner Platz is regularly a high traffic area. The search for more bombing victims would lead to the creation of a huge construction site.

City Official Speaker Karl Schuricht said “whether or not at this location a search for more bodies will be conducted has not yet been determined. First the police will have to give us their best opinion of the situation”. For now, the construction site in the Schützengasse (area) will be halted.

Only when all of the remains of the dead have been removed will construction resume. A construction company which continues in spite of the finding of human remains will be subject to prosecution.

As to the question “Why have they not told us about this mass graves?“

Maybe it’s because occupier’s government of the BRD are a bunch of traitors who don’t give a rat’s ass about German victims, and need to continue to shill for the ALL LIES and to cover up their WAR CRIMES! And to perpetuate the the 25,000 dead myth. Shame on them!

7 Responses to A 2012 Dresden News Article Report on Mass Graves found in the City Center, but known since 2002