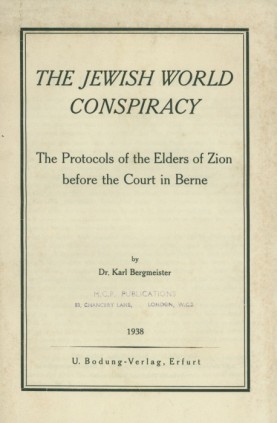 A little-known 1938 booklet “Jewish World Conspiracy” by Karl Bergmeister” rejected the 1935 decision of a Berne Court (overturned on appeal) that the Protocols of Zion were a forgery. It foresaw that World War Two was an Illuminati (Masonic) Jewish trap.

“Their world war is a necessity in order that, in the name of indivisible peace, all that portion of mankind who wish to cast off the Jewish yoke, may be laid low.” Revue internationale des sociétés secrétes, April,1937

“This fight for world-domination has been in full swing ever since Italian Fascism put an end to the destructive activities of Freemasonry, that most dangerous of all Jewish secret societies, and since Germany has declared openly that it is the Jew, and the Jew alone who is the driving force behind the destruction of political order among the different peoples. In complete accordance with the sense of Protocol 7, the dogs of war are to be let loose against those states who desire to free themselves from the Jewish reign of terror, such states as Germany, Italy, Spain, Portugal and Poland.

On the above subject the following forms an interesting extract from the “Revue internationale des sociétés secrétes, No7 of the 1st of April 1937:

“A new war in defence of democracy and of alleged law is being prepared in all haste. An alliance of all the Jewish groups is already complete; it bears the official title of the alliance of the three great democracies, the English, the American, and the French. . . . Israel requires a new world war, and soon! . . . Israel is positively of the opinion that time is getting short. To them their world war is a necessity in order that, in the name of indivisible peace, all that portion of mankind who wish to cast off the Jewish yoke, may be laid low.”

It is just the three countries above mentioned who to-day are completely under Jewish-Masonic control. Practically every member of their respective governments is a Freemason. In their case also in all key positions, men of Jewish origin are to be found, or persons who either as a result of marriage, or of financial obligation, are open to Jewish influence.”

“A Conference of the World Service, the international organisation for defence against Jewish aggression in all countries, took place in Erfurt from the 2nd to the 5th of September of this year. Distinguished experts, authors and political leaders, more especially from the following countries, took part: Belgium, Denmark, Germany, Great-Britain, Finland, Greece, Holland, Italy, Jugoslavia, Canada, Lettland, the U.S.A., Norway, Austria, Poland, Russia (Emigration), Sweden, Switzerland, Spain, South Africa, Czechoslovakia and Hungary. After the commission appointed to enquire into the authenticity of the Protocols had rendered a report of its two years of activity, the Congress unaminously adopted the following Resolution.

“That the present Conference of the World Service taking place at Erfurt from the 2nd to the 5th of September 1937, in which many experts, authors and political leaders from more than 20 different countries are taking part, passes the following resolution relative to the authenticity of “The Protocols of the Learned Elders of Zion”:

That the verdict given in Berne on the 14th of May 1935 to the effect that the Protocols are a forgery, is a faulty verdict. That it only became possible in consequence of the Judge having erroneously based his judgement upon the expertises of the two Swiss experts recommended by the Jewish side C. A. Loosli and Professor A. Baumgarten, after he had heard the 16 witnesses for the Jewish side, and after having refused to hear any single one of the 40 witnesses brought by the Aryan side.

The verdict in Berne has not shaken the authenticity of the Protocols. For their authenticity the following irrefutable fact, among many others, bears witness namely, that Jewry in the social, political, and religious sphere, persistently model all their actions along the lines laid down in the Protocols.”The Protocols of the Elders of Zion” are accordingly the authentic programme of Jewish world politics. “

From 1936 to 1938 World-Service sponsored the international conference of the Pan-Aryan Anti-Jewish Union. World-Service was also known as the International Correspondence for Enlightenment on the Jewish Question.

The Pan-Aryan Anti-Jewish Union also known as the Erfurt Anti-Comintern Conference and World Conference against International Jewry was an international conference, held in secret, and chaired by Ulrich Fleischhauer in Erfurt, Germany. The conferences sponsored by World Service news agency were held from 1936 to 1938 with 60 to 70 delegates attending from 25 countries.
Delegates

Robert Edward Edmondson (born Dayton, Ohio in 1872, died Bend, Oregon April 12, 1959)[1] was a journalist, researcher, and a defendant in the Great Sedition Trial of 1944. He was a delegate to the Pan-Aryan Anti-Jewish Union held in National Socialist Germany in the 1930s. Edmondson was a prolific Jew-wise researcher and leading propagandist equal to Germany’s Joseph Goebbels. He described himself as an American Vigilante Patriot.[2]

“I am not against Jews because of their religion, as a race, a people or as individuals, but because Jewish leadership [i.e. the bankers] is actively anti-American, is attempting to jettison the American political philosophy and take over the Country, and that I would continue to be anti-Jewish until Jewry repudiated such subversion. Were the offender any other than the Jewish minority, my attitude would be precisely the same. This problem is the biggest and most acute thing in the world today…. “Knowing that pitiless publicity is the only cure for public evils, in 1934 I started on a campaign to expose Jewish Anti-Americanism and Talmudic Communism which has been called the “Code of Hell”: a “Rabbi Racket” that victimizes its own followers; an international “Satanic System” subverting France, Britain, Germany and Russia, causing the present depression and moving to take over the United States through the Jewish Radical administration [of FDR.] “

Edmondson in the 1930s and 1940s documented the Jewish control of America in banking, the press and media in a series of essays which numbered over 400[4] called American Vigilante Bulletins. His research on Jewish domination of entertainment media [1] was the forerunner to Who Rules America? written and distributed decades later by Dr. William L. Pierce.

Edmondson was prolific in the number of broadsides and pamphlets that he issued each month. Between 1934 and 1936 its been estimated he distributed over five million pieces of literature.[5]

He believed President Franklin Roosevelt to be Jewish and published the flier Roosevelt’s Jewish Ancestry to make his case.

He appears to be the author of the 1938 pamphlet B’nai B’rith: An International Anti-Christian, Pro-Communist Jewish Power. The pamphlet was issued under the name John Merrick Church.

On June 11, 1936 Edmondson was indicted by a Jew-majority Grand Jury in New York City and charged with “libeling all persons of the Jewish Religion.” In preparing his defense Edmondson subpoenaed some of the most prominent Jews of the time: Bernard Buruch, Henry Morganthau, Rabbi Stephen Wise, Samuel Untermeyer, New York City mayor Fiorello LaGuardia, James P. Warburg, Walter Lippmann and Justice Samuel Rosenman. In response, the American Jewish Committee petitioned the court to drop the charges against Edmondson. On May 10, 1938 the judge dismissed all indictments claiming there is no group libel law.

In the early 1940s Edmondson was again persecuted by the Jews and was indicted along with 29 others on charges of sedition. The Great Sedition Trial of 1944, as it became known, was declared a mistrial and the charges were later dismissed.

Note: Bernard Buruch, Henry Morganthau, Rabbi Stephen Wise, Samuel Untermeyer, New York City mayor Fiorello LaGuardia, James P. Warburg, Walter Lippmann and Justice Samuel Rosenman all belonged to the very same well organized criminal cabal which called themselves “International Jewry” or “Judea”,  which had declared war on Germany in 1933, just as the NSDAP was elected to power in Germany and Hitler was appointed Chancellor in 1933. Henry Morganthau, unquestionably, was the architect of the plan to exterminate all Germans. (More info at the bottom)

There can be no doubt that they were the “Henchmen” for the “Learned Elders of Zion” and also, the puppet-masters of political whores and war mongers Daladier, Reynaud, Roosevelt, Churchill and Stalin. Most are aware of the latter three, but pertaining to the French Prime Ministers:

“In October 1938, Daladier opened secret talks with the Americans on how to bypass American neutrality laws and allow the French to buy American aircraft to make up for productivity deficiencies in the French aircraft industry.[3] Daladier commented in October 1938, “If I had three or four thousand aircraft, Munich would never have happened”, and he was most anxious to buy American war planes as the only way to strengthen the French Air Force.[4] A major problem in the Franco-American talks was how the French were to pay for the American planes, as well as how to bypass the American neutrality acts[5] In addition, France had defaulted on its World War I debts in 1932 and hence fell foul of the American Johnson Act of 1934, which forbade loans to nations that had defaulted on their World War I debts.[6] In February 1939, the French offered to cede their possessions in the Caribbean and the Pacific together with a lump sum payment of 10 billion francs, in exchange for the unlimited right to buy, on credit, American aircraft.[7] After torturous negotiations, an arrangement was worked out in the spring of 1939 to allow the French to place huge orders with the American aircraft industry; though most of the aircraft ordered had not arrived in France by 1940, the Americans arranged for French orders to be diverted to the British.[8]

“Reynaud returned to the cabinet in 1938 as Minister of Finance under Édouard Daladier. The Sudeten Crisis, which began not long after Reynaud was named Minister of Justice, again revealed the divide between Reynaud and the rest of the Alliance Démocratique; Reynaud adamantly opposed abandoning the Czechs to the Germans, while Flandin felt that allowing Germany to expand eastward would inevitably lead to a conflict with the Soviets that would weaken both. Reynaud publicly made his case, and in response Flandin pamphleted Paris in order to pressure the government to agree to Hitler’s demands.[1]:519 Reynaud subsequently left his party to become an independent. Reynaud still had Daladier’s support, however, whose politique de fermeté was very similar to Reynaud’s notion of deterrence.

Reynaud, however, had always wanted the Finance ministry. He endorsed radically liberal economic policies in order to draw France’s economy out of stagnation, centered on a massive program of deregulation, including the elimination of the forty-hour work week.[1]:503 The notion of deregulation was very popular among France’s businessmen, and Reynaud believed that it was the best way for France to regain investors’ confidence again and escape the stagnation its economy had fallen into. The collapse of Léon Blum’s government in 1938 was a response to Blum’s attempt to expand the regulatory powers of the French government; there was therefore considerable support in the French government for an alternative approach like Reynaud’s.”

See Also: The Kaufman and Morgenthau Plans to Exterminate the Germans prior to, during and after WW II